Ol Pejeta Conservancy is a 364sq km wildlife conservancy situated between the foothills of Mount Kenya and the Aberdares and its game-to-area ratio tops the Kenyan park and reserve league. The Ol Pejeta Conservancy in Kenya has over 10000 large mammals and it is the only park where the big 5 and chimpanzees can be seen. It is also where the fastest growing population of rhino in Africa can be found. There are southern white rhino, about 80 endangered black rhino and in a special sanctuary there are two of the world’s last remaining northern white rhino.

Safari by vehicle is not the only option at Ol Pejeta. Safari game walks, horse rides and even camel rides are available, as are safari night drives.

Since being established in 1988 Ol Pejeta has had a colourful list of previous owners including Lord Delamere, an early and influential settler from Britain, shipping tycoon Aristotle Onassis’ father Roussel and the arms dealer Adnan Khashoggi. It was set up originally as a cattle ranch but herds of migrating elephant regularly destroyed the fenced enclosures making intensive cattle farming impracticable. Cattle still plays a role in Ol Pejeta today but as a managed livestock within the conservancy and is used to maximise the bio-diversity of the land making Ol Pejeta an integrated wildlife and livestock area.

The conservancy is keen to educate as well and has an Environmental and Conservation Centre that welcomes around 100 Kenyan schools through its doors annually. The Centre focusses on teaching ecology, culture and the importance of sustainable wildlife management to safeguard the future of the conservancy. Visitors can also learn about local culture and traditions by meeting the peoples of the Samburu, Turkana, Pokot and Maasai. 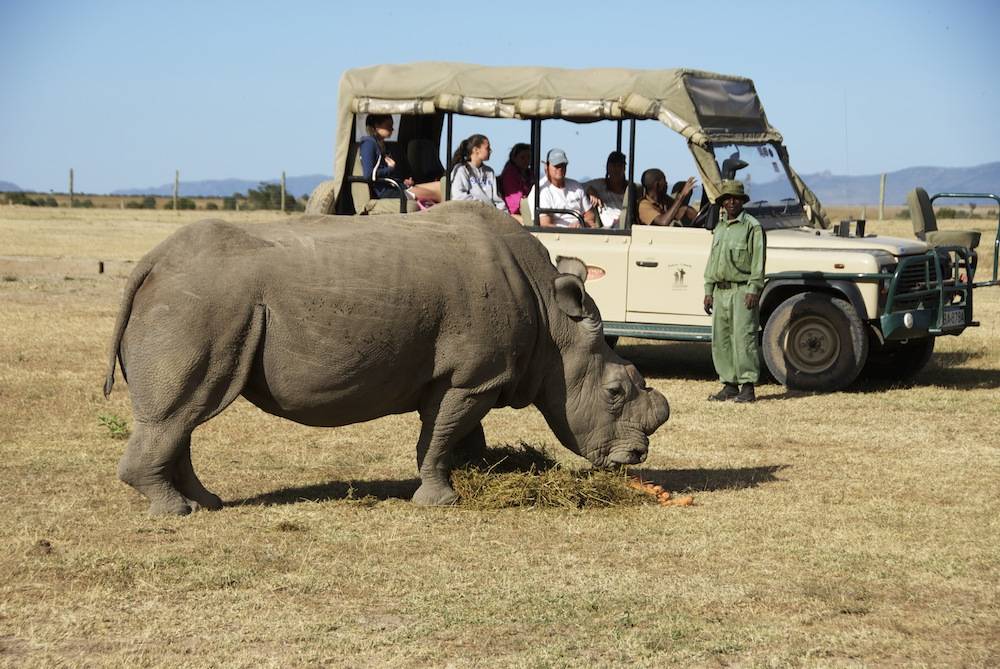 The Endangered Species Boma is a must-see for any trip to Ol Pejeta. Here visitors can meet and learn about the Northern White Rhinos which are critically endangered with only two left in the world. Both of them are here and visitors can have the unique experience of seeing these majestic creatures up close. The boma also has six southern white rhinos, two black rhinos and numerous Grevy’s zebras and Jackson’s hartebeest. Tour starts at 2.45 pm. Approximately 2 hours.

*Above rates inclusive of transport within the Boma Baraka was one of the first rhinos born on the Ol Pejeta Conservancy. After losing an eye to an infection following a fight he unfortunately developed a cataract in the other eye and subsequently became completely blind. With a low chance of survival on his own, Baraka was moved from the wild to a 100 acre enclosure in order to ensure his safety.

Baraka is now an ambassador for his species – and a popular attraction at Ol Pejeta. There is a feeding platform from which visitors can get up close to view and feed him, an experience not to be missed. Baraka receives visitors daily from 9.30am to 6.00pm, with feeding times three times per day.

The cost of the visit to Baraka and the Information Center is already included within the Conservancy Fee. Formed in 1993 as a joint alliance between The Jane Goodall Institute and Kenyan Wildlife Services this sanctuary was established as a refuge for orphaned and confiscated chimpanzees and is the only place in Kenya where non-indigenous chimpanzees can be seen.

The Sanctuary provides a permanent refuge in as natural environment as possible – the 40 or so chimpanzees are protected on an island and access to see them is by boat.

NB  Porini Rhino Camp guests gain priority access to the Sanctuary from 9am (before guests of other camps arrive from 10am).

The cost of a visit to the Chimpanzee Sanctuary is already included within the Conservancy fee. Take this unique opportunity to head out on Ol Pejeta Conservancy to track the lion population. It is a great way to support the conservation project and to learn more about these fascinating animals. All of the information gathered is passed on to the Ol Pejeta Ecological Monitoring Department. Guests remain in the vehicle at all times. Tracking excursions depart daily between 06:30h – 09:30h and 15:30h – 18:30h. The Morani Information Centre offers visitors the opportunity to learn about the different wildlife species that live on Ol Pejeta; from anatomy to behaviour to habitat. It also offers an insight into how Ol Pejeta Conservancy works on a daily basis to safeguard wildlife and preserve wilderness.

There is also a converted rhino transportation crate to explore!

The Morani Centre is open from 9 to 5 every day and is free of charge.